On behalf of the Parish Council and the residents of Rampton & Woodbeck we offer our condolences to the Royal Family on the passing of Her Majesty Queen Elizabeth II.

Our sadness at this time is shared by people across the globe, as we remember with affection and gratitude the lifetime of service given by our longest reigning Monarch.

In accordance with protocol the Parish Council will shortly arrange for a Book of Condolences to be available for residents to sign in the Village Hall hallway. More »

Flowers may be laid on the green verge outside of the village hall/ church.

The Parish Council Meeting planned for 12th September 2022 has been cancelled.

We ask residents, at their discretion to fly only Union Flags at half-mast until the end of the day of the state funeral.

Books of condolence will also be opened at the following locations:

The books of condolence will be opened for signing from 9.00am to 5.00pm Monday to Friday, or dependent on office hours of the rural locations and will remain open until 5.00pm on the day following the funeral. There will also be a link to the Royal e-book of condolence from the Bassetlaw District Council website.

Provision will be made for the general public to lay flowers at the following locations:

We will pass on any information received about other plans and arrangement during this period of mourning as they are received. » Less 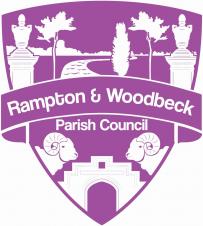 l. Following the resignation of Councillor Sue Kyle there is a vacancy on Rampton and Woodbeck Parish Council.

2. A By-election to fill the vacancy will be held if, within 14 days (not counting Saturdays and Sundays and certain Bank Holiday periods) from the date of this notice, 10 electors for the Parish give notice in writing claiming such an Election to the Returning Officer.

3. The address of the Returning Officer is:- More »